We’ve seen some prominent people buried over the past week, starting with Aretha Franklin. The Queen of Soul’s epic 8-hour long funeral at Greater Grace Temple in Detroit was attended by hundreds, including many celebrities. But the ceremony was not without inappropriate race baiting and Trump bashing, starting with Al Sharpton. Sharpton wasn’t the most controversial figure in attendance, though. Nation of Islam founder Louis Farrakhan, someone Democrats are finally starting to distance themselves from because of his obsessive anti-Semitism, was given a prominent seat in the service. Although he wasn’t asked to speak, Farrakhan was seated directly beside Sharpton, Jesse Jackson and former President Bill Clinton. But since the media understands their Democrat friends don’t want to be associated with Farrakhan anymore, many news outlets chose to crop Farrakhan out of their photos. Unbelievable… 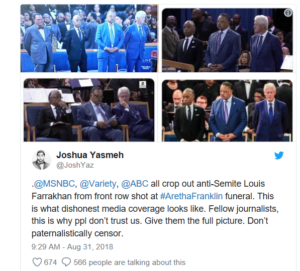 Then there’s the funeral of Senator John McCain, where it was the deceased’s own family who chose to use the occasion as a platform for bashing Trump despite the fact that he lent the family Air Force 2 to fly his body from the service in Arizona, to the Capitol Rotunda in D.C. where he lay in state, to the burial at the U.S. Naval Academy in Maryland.

Ed wrote some thoughts on Facebook last week. Check it out:

I just watched Megan McCain’s entire speech at her father’s funeral. While I thought it was an overall moving eulogy of her father that she obviously loved very much, I think the speech came off a little angry. Angry at that fact that her father deserved more recognition than he got more appreciation than he got, more respect than he got. Angry at Donald Trump – for what reason, I don’t know.

“We don t need to make America great again; it has always been great.” I partially agree with her, but after her father lost to Barrack Hussein Obama, there were 8 years of the start of a “fundamental transformation of this country” that turned our country about face. It taught our country that its ok to sponge off the government, that we are all owed something because we are Americans. Not that we owe it to ourselves, our families and our country to do all we can do and be all we can be, but that our country owes us – all I can say is, WTF? Where did this come from? Consequently, America had always been great until the most corrupt presidential administration in history, the Obama administration! Trump came in to turn things around and to make America great again.

I know Trump is politically incorrect in what he says and how he says things, but apparently the message he is sending is resonating with the voters – otherwise, he would not have won the White House. While Meghan McCain and others celebrated John McCain’s maverick, go-against-the-grain style and temper – and, the fact that he speak what was in his mind at any given time – none of this is afforded Donald J. Trump. Meghan continuously took shots at the President as if it was his fault that her father died. He was 3 to 4 days from his 82nd birthday, he had a long, great life, and no one killed him. He had a brain tumor, it’s no one’s fault. Let him rest in peace.