The hearing took place on Thursday and Christine Blasey Ford showed up. Here’s part of her opening statement, where she explains why she sent a letter in June to the office of her congressperson, Anna Eshoo of California’s 18th District, who then sent the letter to Diane Feinstein’s office in July.

Another week goes by with Democrats using unsubstantiated accusations to destroy Supreme Court Justice nominee Brett Kavanaugh. Let’s recap what happened before the hearing on Thursday:

Ed alert: “Why would we think it’s all lies? Gee, maybe because we caught Gloria Allred’s daughter offering to pay the mortgages on women’s houses if they made allegations against Trump…” How do we know this isn’t happening again? 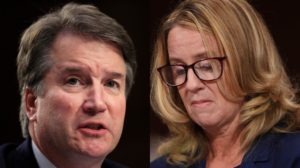 As for the first accuser, Christine Blasey Ford, there are still no corroborations from the people she named in her Washington Post interview as witnesses to her alleged incident with Kavanaugh. But that didn’t stop the Democrats from babying her all morning on Thursday, and Kavanaugh’s passionate denials didn’t stop them from putting him through hell…lucky for all of us, Lindsey Graham has got his mojo back and he’s out to set them straight!

Get the hearing recap on this week’s show – and, check out Ed’s debut column this week in Townhall.