Senate Republicans continue to support Supreme Court nominee Brett Kavanaugh in the fight against one woman’s suspiciously timed accusations of sexual assault from 35 years ago.

Here’s a recap of this week’s events:

And now, Ed Whelan – a former law clerk for Justice Scalia who now runs the conservative think tank Ethics and Public Policy Center – has uncovered evidence that the house where the party most likely took place was hosted by a kid who looked exactly like Brett Kavanaugh. Chris Garrett, a Georgetown prep classmate and football teammate of Kavanaugh’s, could have easily been mistaken for his classmate Brett. 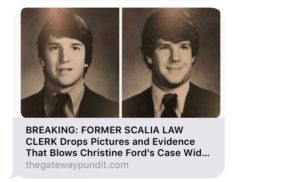 As it turns out, plenty of Democrats have their own similar stories from high school and one of them is Cory “Spartacus” Booker. From the Washington Post on Friday:

When he was in high school, Cory Booker, the New Jersey Democrat and possible White House contender, groped his classmate as they kissed. He reached for her breast, and when she swatted his hand away, he made another attempt…

…But the skeleton in Booker’s closet seized on by outlets such as Fox News and the Daily Caller wasn’t really in his closet. The senator himself chose years ago to air the issue, marking a notable contrast with instances in which accusations of impropriety burst forth as a result of media investigation or opposition research. (Really? A “noble contrast”?)

In 1992, Booker, then a student at Stanford University, wrote a column for his college newspaper in which he recounted the groping and used his own behavior to underscore, in starkly personal terms, how his views had shifted on gender and sexual respect. He credited his work as a peer counselor with the transformation.

“After having my hand pushed away once, I reached my ‘mark,’” he wrote. “Our groping ended soon and while no ‘relationship’ ensued, a friendship did. You see, the next week in school she told me that she was drunk that night and didn’t really know what she was doing.”
Booker’s words speak for themselves.