President Trump was handed a major legislative victory this week, with Congress approving a sweeping bipartisan criminal justice reform bill on Thursday after it passed in the Senate on Tuesday. The bill is called The First Step Act, and it’s designed to address concerns from both sides of the aisle about exploding prison populations, life sentences for non-violent drug offenses, and the overall failure of the war on drugs.

Details on The First Step Act:

The bipartisan sponsors of the bill gave a press conference Wednesday: Republicans Chuck Grassley, Mike Lee, Lindsey Graham and Tim Scott – and on the Democrat side, Dick Durbin of Illinois, followed by – this might hurt, but let’s give credit where credit is due – Cory Booker of New Jersey. 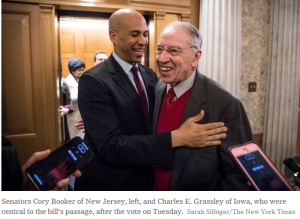 Senator Durbin explained he was unsuccessful in getting any traction for this bill for years – that is, until the election of Donald Trump. Durbin’s comments about that were fascinating, especially when he specifically thanked presidential son-in-law Jared Kushner – someone the Democrats normally love to villify.

Funding the Government and the Wall

Early in the week, it was reported that President Trump was backing off his demands for $5 billion in border wall funding. But by Thursday morning, he was changing his tune. As of Friday afternoon, it looks like the Republicans just don’t have the votes for the wall funding. As for a shutdown scare, we’ll see what happens in the next few days – but as always, there’s bound to be a continuing resolution just around the corner – also known as kicking the can down the road.

Meanwhile, the U.S. State Department quietly pledged $5.8 billion in aid to Central America, and another $4.8 billion in development aid for southern Mexico, in response to the migrant caravan crisis.

According to the joint statement released by the U.S. State Department and Mexico’s Department of Foreign Relations, the aid is intended to promote better security conditions and job opportunities that will allow Central Americans and Mexicans to remain in their countries and not feel the need to emigrate.

Some celebrity news: Soon-to-be Congresswoman Alexandria Ocasio-Cortez (she’s a celebrity now) gave us one of her classic millennial moments as an early Christmas gift.

In this final week before the 29-year-old Democratic Socialist becomes a sitting member of Congress, Ocasio-Cortez used Instagram and Twitter to announce that she’s headed for upstate New York to “sit in the middle of nowhere” and devote her last week as a private citizen to “self-care.”

After that, Ed plays some more enlightened commentary from an actual celebrity: actor Jon Voight.

All of this and more on this week’s The Main Event! Merry Christmas, everyone!