Developments in the Caravan

Morale appears to be eroding inside the various migrant caravans pushing toward the United States. Some members are dropping out to return home, some opting to apply for asylum in Mexico. However, those who journey on toward the U.S. border (some toward Texas, others breaking off and moving west toward California) demanded this week that Mexico help them get here.

How? Early in the week, leaders of the caravan attempted to appeal to the Mexican government to provide them “safe and dignified transport” through the country in order to avoid wading through the water in the isthmus of Mexico and the violent city of Veracruz. The transport requested? Buses. Mexican officials ignored the request. By Thursday, Walter Cuello (one of the Honduran organizers of the first caravan) admitted to reporters, “The attempt to get the buses has failed.” Ed alert: “Why did they ignore the request? Because they don’t want to break any deals with President Trump. It’s nice to have a President who puts our interests first.” Meanwhile, Obama is using his time at Democrat campaign rallies to mock those of us who don’t want this caravan invading our border and Harry Reid is eating the words he said about birthright citizenship back in 1993. 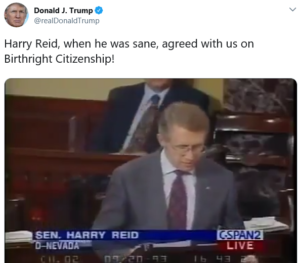 Some inconvenient truths about the caravan:

Speaking of truth and lies…

Democrats have shown they will do whatever it takes to make the blue wave happen on November 6th, no matter how low they have to stoop. What they did to Judge Kavanaugh backfired, funding the caravans backfired…and whatever you believe about the mail bomb stunt – er, threats – they also backfired (we aren’t hearing about that anymore, are we? Except for this: Coincidentally, porn-star-who-sues-Trump Stormy Daniels and bomb threat suspect Cesar Sayoc have worked at
the same strip club in the recent past. Interesting…)

After 11 people were killed in Pittsburgh, Democrats had no problem using the tragedy to spread another lie about President Trump: that he’s anti-Semitic, even though his daughter and grandchildren are Jewish. The lies about the President are multiplying; meanwhile, the Dems’ Message of the Week in the final days before the midterms is that President Trump lies. It started on Sunday with ABC’s Jonathan Karl, who asked the President whether he always tells the truth. “When I can, I tell the truth” was only part of Trump’s reply, but the headlines generated included:

But guess who had a very similar answer about truth back when she was running for President? Yep!

Tune in this week to hear more!