After two recounts, multiple lawsuits and loaded political rhetoric, the 12-day election marathon in Florida is finally drawing to a close, with Republicans coming out on top in both races.

What’s also over is the Georgia governor’s race, where Republican Brian Kemp won by 55,000 votes (just barely over 50%). Because Kemp’s lead is so narrow, Abrams – who has claimed to be a victim of “voter suppression” since election day – says she plans to bring “a major federal lawsuit against the state of Georgia for gross mismanagement of this election.” Check her out refusing to say Kemp is the legitimate governor-elect of Georgia now.

Abrams claims voter suppression in her race, but California’s election was plagued with voter fraud. Calling in to the show to talk about that is Aja Smith, who lost her race against incumbent Democrat Mark Takano in the 41st District.

Although Democrats took back control of the House this midterm, the election isn’t over for one very important person: Minority Leader Nancy Pelosi. 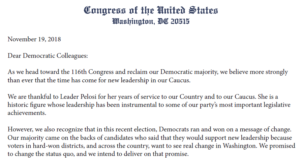 But before the President made his offer, Pelosi had already said she doesn’t want any help from Republicans. “I intend to win the speakership with Democratic votes,” she told reporters.