On Monday, Massachusetts Senator Elizabeth Warren released the results of a DNA test that she says vindicates her long-criticized claim of Native American ancestry. In an effort to tie up a political loose end before a presidential run in 2020, Warren accompanied her announcement with a 5-minute ad on her website and YouTube called “Elizabeth Warren’s Family Story.” You may remember the reason Warren’s ancestry matters is that she is said to have gotten her tenure at Harvard Law School in 1995 by claiming to be Native American. A 1996 Harvard Crimson article refers to her as Native American, and a 1997 article from the Fordham Law Review says, “Harvard Law School hired its first woman of color, Elizabeth Warren, in 1995.” 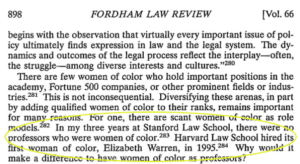 And yet, Warren’s new ad features interviews with former Harvard colleagues who claim her heritage had “nothing to do with her hiring.” If that’s the case, why did the school publicize it at the time?

And now, we know that Warren’s DNA test revealed her Native American ancestry is as many as eight to ten generations ago. Ed alert: “That’s 1/1,024th Native American…and he compared her DNA to Aztecs, not Cherokees.” Then there’s the statement from the Cherokee Nation: “It makes a mockery out of DNA tests and its legitimate uses while also dishonoring legitimate tribal governments and their citizens, whose ancestors are well documented and whose heritage is proven. Senator Warren is undermining tribal interests with her continued claims of tribal heritage.”  – Cherokee Nation Secretary of State Chuck Hoskin Jr.

Can you say “fraud?”

Forgot why Stormy Daniels matters? We all did. Here’s why she was suing the President.

In what appeared to be an effort to keep her case at the center of the news, Daniels’ sleazy lawyer Michael Avenatti filed a lawsuit on Daniels’ behalf in April 2018. The suit alleged that Trump attempted to tarnish her reputation and credibility by dismissing her account and description of a man who she says threatened her in a parking lot in 2011. Avenatti based the lawsuit on the President’s tweet back in April, when he called Daniels a “total con job.” 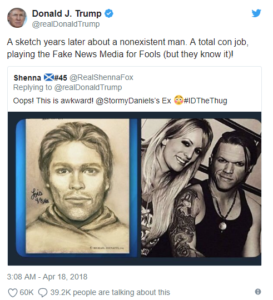 “By calling the incident a ‘con job,’ Mr. Trump’s statement would be understood to state that Ms. Clifford was fabricating the crime and the existence of the assailant, both of which are prohibited under New York law, as well as the law of numerous other states,” Avenatti wrote in the lawsuit. Daniels was seeking damages in excess of $75,000.

Well, she didn’t get it – and now, everyone who donated to her legal fees on GoFundMe was actually donating to Trump’s legal fees. Poetic justice.

There’s more in the second half, including the death of Saudi journalist Jamal Khashoggi and the latest on the migrant caravan headed toward the border this week. Be sure to tune in!